The use of video in communication is more popular (and easier) than ever before. But does video increase the performance of sales emails? Does it impact the open or reply rates? We dug in to find out.

Recently, our data science team examined the effects of sales email personalization, revealing powerful insights on how much, where, and, in another post, the length of time sellers should be modifying email content to get the most opens and replies. At SalesLoft, we believe in the power of an authentic, human approach to sales. As such, our next effort focused on increasing the performance of sales emails using video.

Our data science team pulled together just over 134 million emails generated purely from cadences, examining the effects of including a video at various times in a cadence. 4.5 million of these emails contain an embedded video, which has an image along with a link to the video content versus a potentially tracked link. Here’s an example from one of our sales professionals leveraging such an email:

Figure 1: An example of a positive match for a video email in our experiment

We also took into account the day of the cadence the email went out on, and the location of the video within the communication. In the above example, the video was sent on day 4 and is 131 characters (44%) into the email. As a privacy precaution, signatures are removed from our experiments.

It’s always challenging to find that glimmer of insight in a sea of noisy data, so our data science team went the extra mile to ensure we delivered the highest value information. As part of our effort, we analyzed the effect of using video only for teams and sellers that historically use video. This prevents the baselines (i.e., what happens when you don’t use video) from being misleadingly low, and ensures that our insights are as scientifically sound as possible.

On average, using video content has a significant positive impact on both open and reply rates. Teams that use video enjoy a 16% bump in open rates and a remarkable 26% increase in replies! Therefore, while you can expect even more significant gains by strategically timing and placing your content, you will, on average, benefit from at least giving video content a try.

Time Your Emails for Better Engagement

While video is a powerful addition to a sales email strategy, it is easy to get overwhelmed by all of the possible ways to incorporate it. Not every outgoing email should be a candidate for a video embed. Deciding when and where to use video can leave even the best sales professionals wringing their hands.
We pulled the averages and segmented our data in two ways:

2.     Where (both by character count and proportionally) the video was included within an email.

Let’s take a condensed look at our data considering the day. 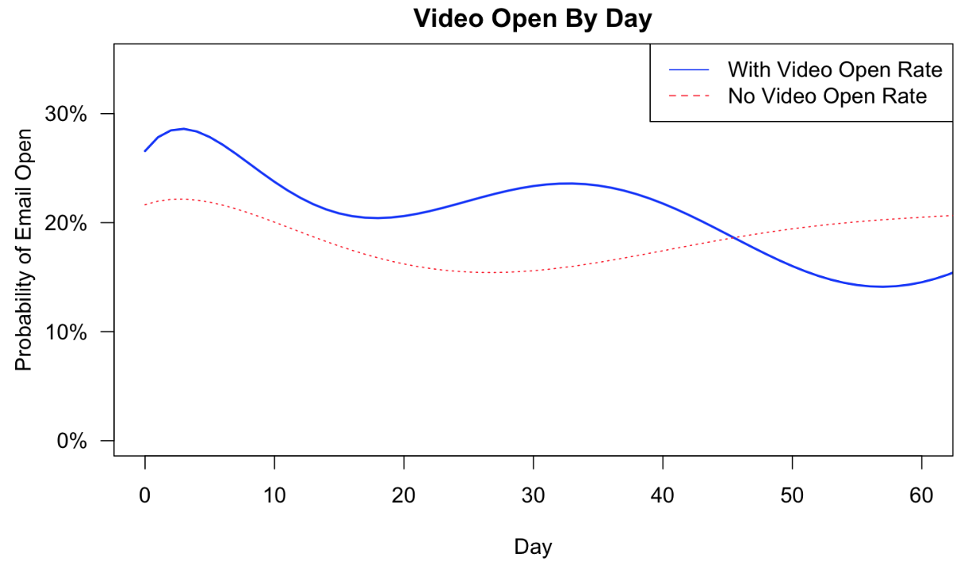 This first plot examines the effect on open rates. While it may not be a surprise, there is a significant benefit to utilizing videos earlier in the process. When video is used in the first week of a cadence, the email open rate was higher.
Interestingly, the utilization of video in email seems to have a positive impact on open rates for the first month and a half. However, the relative boost over email with no video varies wildly. This tells us that using video gets more eyes on your emails for the vast majority of cases. Analyzing the reply rates tells us a slightly different story. 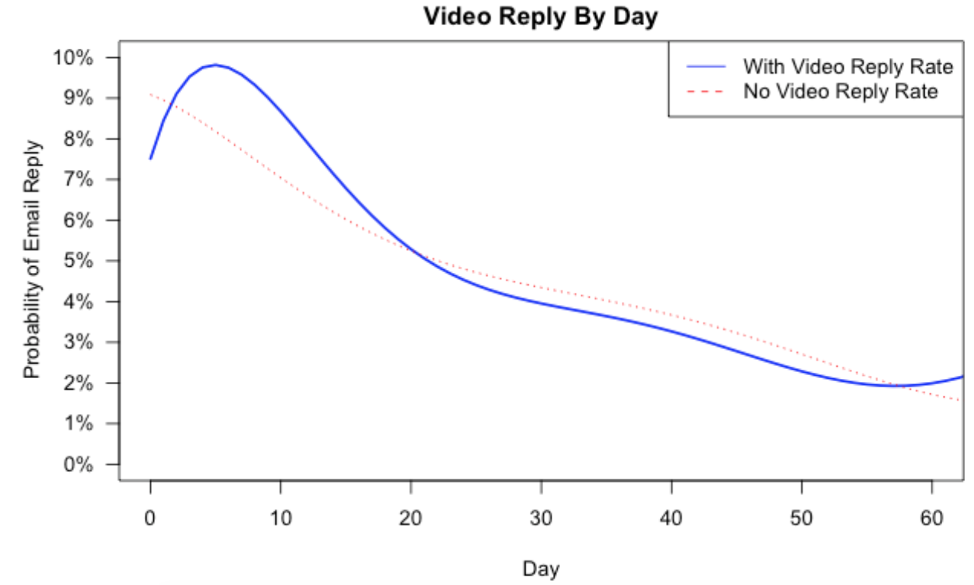 With this plot, we learn a more specific strategy for the early part of the cadence. Senders stand to get the highest open rate on video content literally on the first day of a cadence. However, it’s not the best time if you’re gunning for a reply. That honor is reserved for the 8th business day.
Salespeople benefit the most from using video when sending after day 2 and before day 20. Nearly any other time in a normal timeline is slightly worse than not using video. Focusing on where video supersedes the non-video line in Figs. 3 and 4, sellers using video content get more opens before day 45 and more replies between day 2 and 20.
Since both video and non-video emails degrade in engagement as days progress, it can help to directly compare their performance. For example, while it is true that the best reply rates come from using video content on day 5 (Fig. 4), the benefit of video compared to non-video is actually highest (nearly 2%) on day 8 (Fig. 5, right).

Figure 5: Another perspective on Figs. 3 and 4, showing how using video performs strictly compared to non-video

Get the Most out of Video with Proper Placement

After covering the when to send a video, we then factored our data to examine where within an email to place it.
We found that open rates are largely unaffected. This could be due to many reasons. We hypothesize that it is largely because videos often don’t appear in the preview pane of most email applications, except as an icon indicating an attachment. As a result, we focus only on replies. 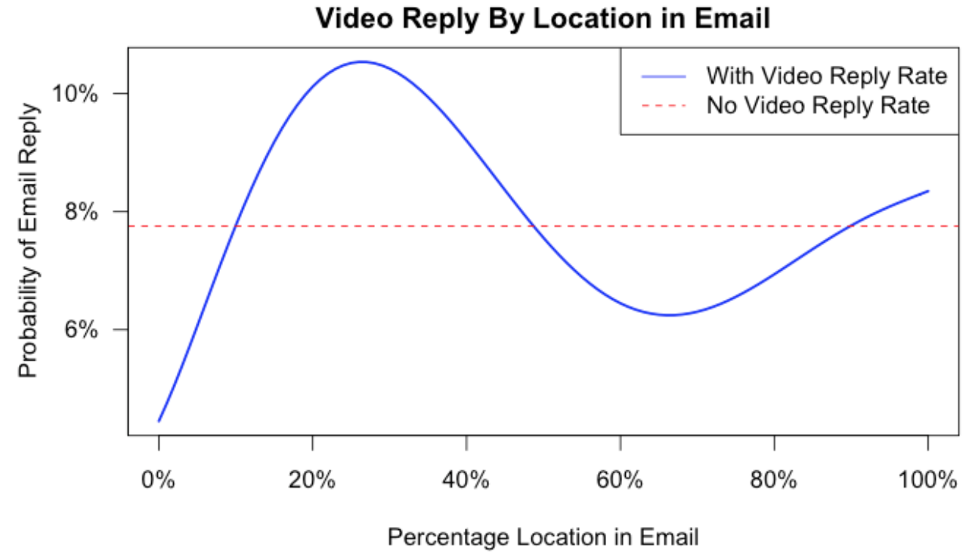 Our team found a dramatic impact in strategically embedding a video in an email. Sales professionals who place videos after the first 10% but before the halfway point of an email see the biggest increase in replies. There is another light jump right at the end, such as in the postscript for instance. Those that choose to lead straight away or put it after the bulk of content performed worse than those who didn’t use video at all!
Of course, knowing the proportional location is certainly valuable. How much text that 10% comprises remains to be answered, so let’s examine actual character counts. 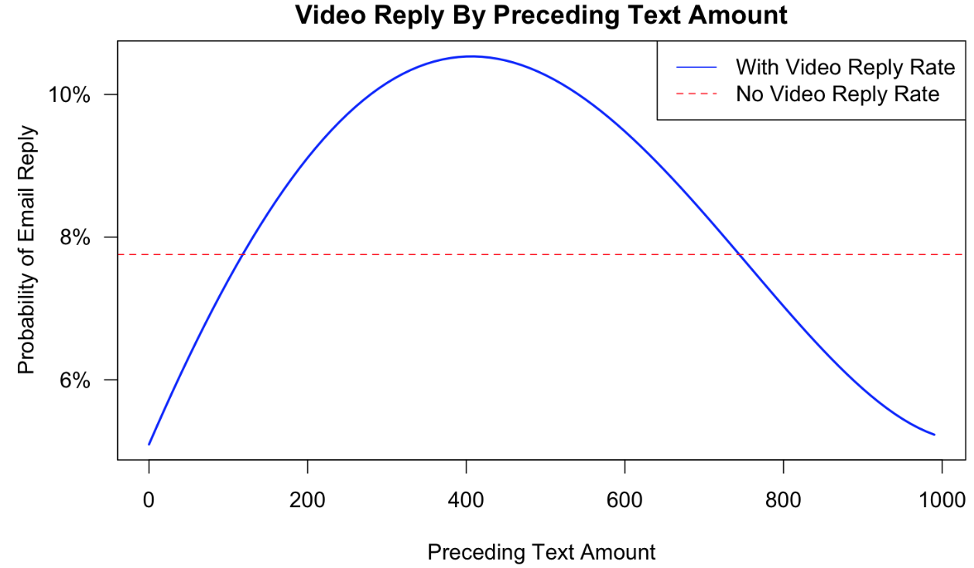 Figure 6: Reply rate to emails based on the number of characters that precede a video

The inclusion of video to improve engagement is a hotly debated subject, in large part due to the time commitment it takes to develop recorded content. The obvious question is – is it worth it?
After examining over 134 million emails, our data scientists concluded that a well-placed and timed video in a sales email is an undisputed value-add to sales cadences. Emails that include an embedded video are typically opened much more often than those without. Moreover, emails containing a video sent within the 2nd and 20th day of a cadence result in significantly higher reply rates. To maximize your sales team’s gains, place a video after a short introductory statement, but before the latter half of the email.

Choose a video platform from our App Directory and see how easy it is to incorporate video into your SalesLoft emails and cadences. 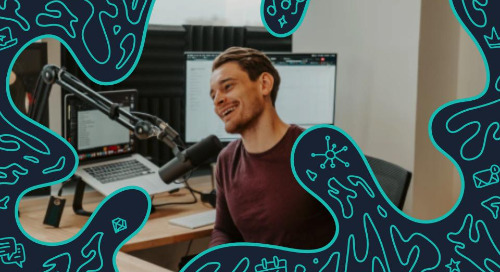 Remember back when we were first working from home during this pandemic, like 46 weeks ago? We were happy ... 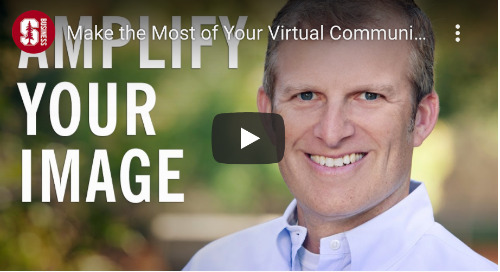 Make the Most of Your Virtual Communications, as seen on Stanford Business

You most certainly have had the unfortunate opportunity to sit through a boring, unorganized virtual presen... 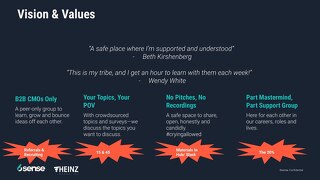 "A safe space where I'm supported and understood" is exactly what we want the CMO Coffee Talk community to be. Here is a look into our vision and values. 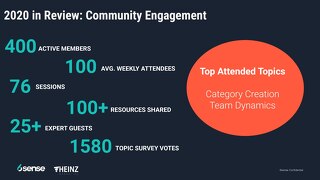 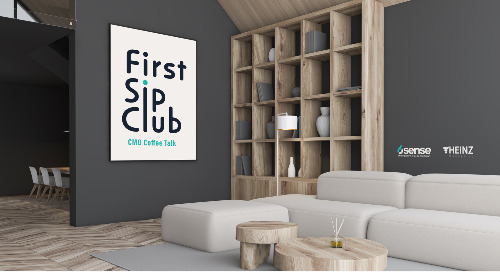 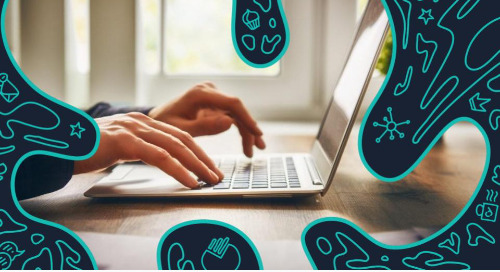 Here's a few external resources (podcasts to listen to, articles to read, videos to watch) that Matt & Latane have handpicked to share. 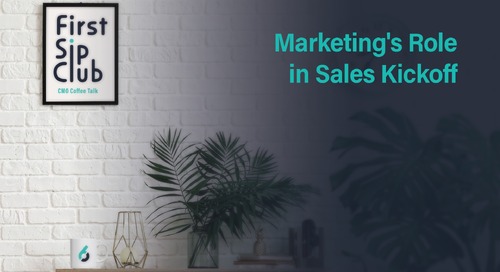 This week Latane and Matt talk about Marketing's role in Sales kickoff. 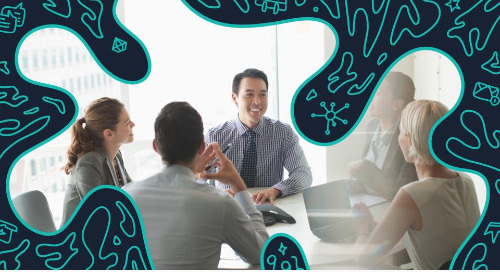 Chief Market Officers: Own Your Role And Win, as seen on Forbes

Woman-in-the-mirror moments are uncomfortable. I had a big one when, after an eye-opening retreat with women chief marketing officers (CMOs), I dug into how I spent my time as 6sense’s CMO. 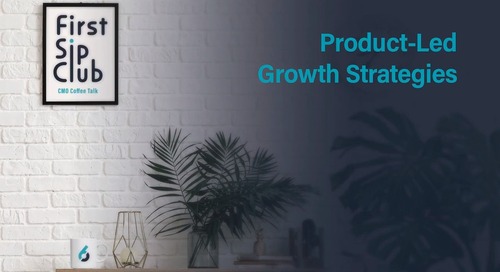 This week Latane and Matt talk about product-lead growth strategies, and ways marketing can get involved with product. 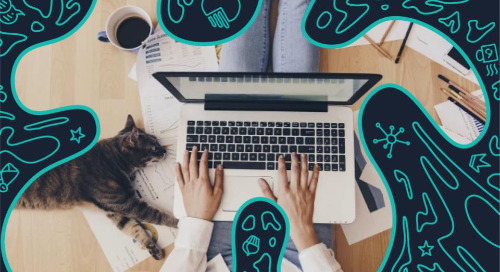 Five Audiences and Nine Opportunities: What B2B CMOs Worked Through This Past Week

More than 100 B2B marketing leaders joined us for coffee (virtually of course) this past Friday to discuss a wide variety of topics, themes and priorities. Learn the key takeaways and opportunities. 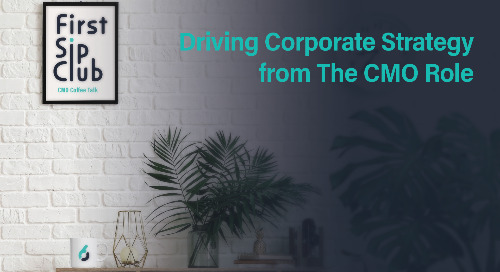 11:10
The First Sip Club Wrap Up: Driving Corporate Strategy from the CMO Role

Tune in this week as Latane, Matt and Kimberly talk about driving corporate strategy from the CMO role. 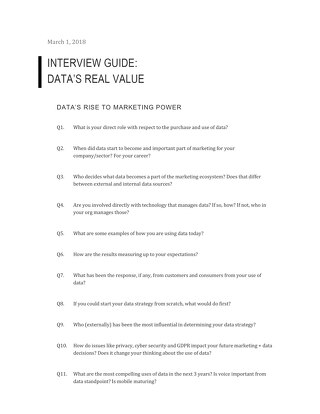 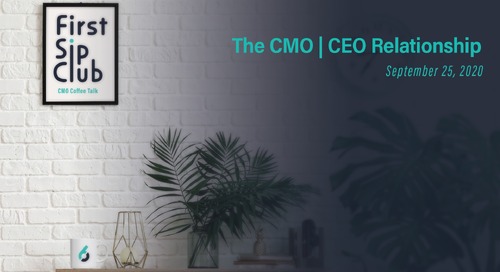 Sit down with Latane and Matt every week to go over key takeaways from this weeks CMO Coffee Talk, this week its the relationship between the CMO and CEO. 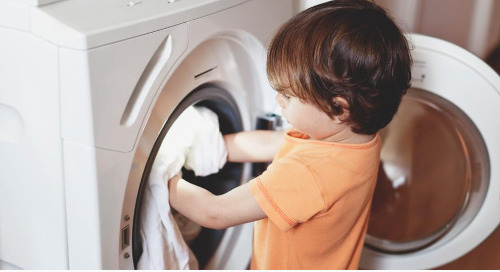 A New C-Suite Role: The Chief Market Officer, as seen on Forbes

Marketers are fascinated with titles. Just look at the publicity surrounding Coke’s shift to a Chief Marketing and Commercial Officer and then their move to a Chief Growth Officer. 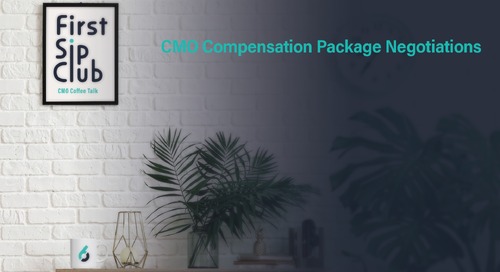 Tune in as Matt and Latane talk about CMO Compensation Negotiation Packages. 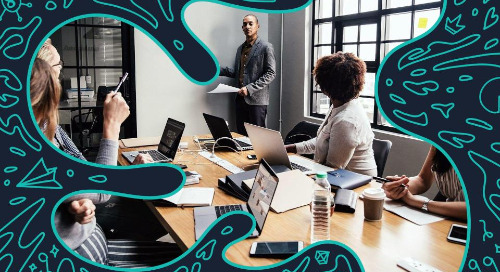 Own The Market, Not Just The Marketing: What CMOs Talked About Last Week

There’s an enormous difference between merely running the marketing at your organization and having responsibility for the addressable market. 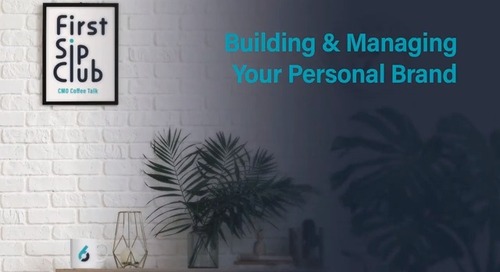 This week Latane and Matt are talking about building and managing your personal brand.